How can a Boxer dog serve as a business role model? To maintain a thriving service business over the long term, you need to nurture a special kind of business acumen, one that fosters looking at the bigger picture even in the face of extreme danger. I suggest reading this true story of  Rocky the Boxer dog with that in mind. (The story is long, but well worth the read. The lesson at the end should be food for thought for any serious entrepreneur.) 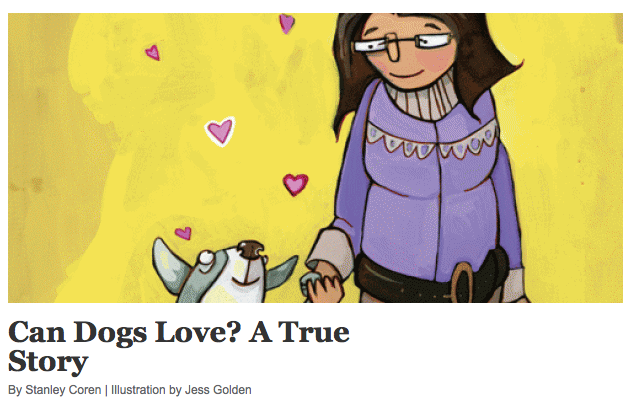 IF YOU WANT TO CAUSE A COMMOTION IN ANY PSYCHOLOGY department or any other place where animal and human behaviour is studied, all that you have to do is to claim that your dog loves you. Skeptics, critics, and even some ardent supporters will pour out into the halls to argue the pros and cons of that statement.
Among the skeptics you will find the veterinarian Fred Metzger, of Pennsylvania State University, who claims that dogs probably don’t feel love in the typical way humans do. Dogs make investments in human beings because it works for them. They have something to gain from putting so-called emotions out there. Metzger believes that dogs “love” us only as long as we continue to reward their behaviours with treats and attention.

From the perspective of most dog owners, however, there is little doubt that dogs can truly love people. Take the story of Rocky and Rita from the Finger Lakes region of New York State, near Rochester.

Rocky was a solid 65-pound Boxer, classically colored with a chestnut brown coat and a white blaze on his chest. At the time of this story, Rocky was three years old and Rita was his eleven-year-old companion. Rocky had been given to Rita when he was ten weeks old, and she immediately bonded with him, petting him, handfeeding him, teaching him basic commands, and letting him sleep on her bed.

Whenever she was not in school, the two were always together and within touching distance. The family would often fondly refer to the pair as “R and R.”

Rita was a relatively timid and shy girl, and as the dog grew in stature he brought her a sense of security. When Rocky was next to her she felt confident enough to meet new people and to go to unfamiliar places. Rocky took on the roles, not only of friend and confidant, but also of defender.

When encountering strangers, he would often deliberately stand in front of Rita, as a sort of protective barrier. He seemed to be without fear, such as once when Rita was about to enter a store and two large men dressed in biker outfits burst out of the door, yelling at the shopkeeper and nearly knocking Rita over.

Rocky rushed forward, putting himself between the frightened girl and the two threatening men. He braced himself and gave a low rumbling growl that carried such menace that the men backed off and gave the child and her guardian a wide berth.

There was, however, one flaw in Rocky’s armour. It was a fear of water that was so extreme that it was almost pathological. Boxers are not strong swimmers in any event, and are often shy of the water.

However, Rocky’s fears stemmed from his puppyhood, when, at the age of seven weeks, he was sold to a family with an adolescent child. The boy had emotional problems and acted as if the attention bestowed on the new puppy somehow meant that he was less important. In a jealous rage, he put the puppy in a pillow case, knotted the top and threw it into a lake.

Fortunately, the boy’s father saw the incident and managed to retrieve the terrified puppy before it drowned. He scolded the boy and returned to the house. The next day the horrified parent saw his son standing waist-deep in the lake trying to drown the struggling puppy by holding him under water. This time Rocky was rescued and returned to the breeder for his own safety.

These early traumas made water the only thing that Rocky truly feared. When he came close to a body of water, he would try to pull back and seemed emotionally distressed. When Rita would go swimming in the lake, he would pace along the shore trembling and whimpering. He would watch her intently and would not relax until she returned to dry land.

One late afternoon, Rita’s mother took R and R to an upscale shopping area. It was located along the edge of a lake and featured a short wooden boardwalk which was built along the shore over a sharp embankment that was 20 or 30 feet above the surface of the water. Rita was clomping along the boardwalk, enjoying the way the sounds of her footsteps were amplified by the wooden structure.

It was then that a boy on a bicycle skidded on the damp wooden surface, hitting Rita at an angle which propelled her through an open section of the guard rail. She let out a shriek of pain and fear as she hurled outward and down, hitting the water face down, and then floating there unmoving.

Rita’s mother was at the entrance of a store a hundred feet or so away. She rushed to the railing shouting for help. Rocky was already there, looking at the water, trembling in fear, and making sounds that seemed to be a combination of barks,whimpers, and yelps all rolled into one.

We can never know what went through that dog’s mind as he stood looking at the water-the one thing that truly terrified him and that had nearly taken his life twice. Now here was a frightening body of water that seemed about to harm his little mistress. Whatever he was thinking, his love for Rita seemed to overpower his fear and he leapt out through the same open space in the rail and plunged into the water.

One can thank the genetic programming that allowed the dog to swim without any prior practice, and he immediately went to Rita and grabbed her by a shoulder strap on her dress. This caused her to roll over so that her face was out of the water and she gagged and coughed. Despite her dazed state she reached out and managed to cinch her hand in Rocky’s collar, while the dog struggled to swim toward the shore.

Fortunately the water was calm, they were not far from shore, and Rocky quickly reached a depth where his feet were on solid ground. He dragged Rita until her head was completely out of the water, and then stood beside her, licking her face, while he continued to tremble and whine. It would be several minutes before human rescuers would make it down the steep rocky embankment, and had it not been for Rocky, they surely would have arrived too late.

Rita and her family believe that it was only the big dog’s love of the little girl that caused him to take what he must have considered a life-threatening action. This certainly casts doubt on Dr. Metzger’s theory that dogs don’t love us but act only out of self-interest …

Here, at first glance you might say the business analogy weakens. But does it really? Yes, as a businessperson, your entrepreneur mindset will have you weighing the costs and benefits of your actions. If Rocky had done that, he would most likely have hit the water anyway. Why? Because his love for Rita was his highest value. In your case, which does your business acumen tell you is the more productive focus in the long run: short-term profit, or taking the best possible care of your clients? 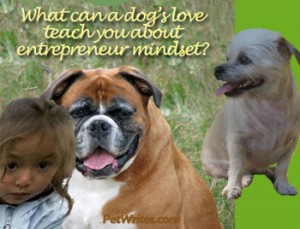 Here’s the rest of the story:

Marc Bekoff, a behavioural biologist at the University of Colorado, has a different interpretation. He notes that dogs are social animals. All social animals need emotions, in part as a means of communication-for instance you need to know to back off if another animal is growling.

More importantly, however, emotions keep the social group together and motivate individuals to protect and support each other. Bekoff concludes that strong emotion is one of the foundations of social behaviour and is the basis of the connection between individuals in any social group, whether it is a pack, a family or just a couple in love.

Recent research has even identified some of the chemicals associated with feelings of love in humans. These include hormones such as oxytocin, which seems to help people form emotional bonds with each other. One of the triggers that causes oxytocin to be released is gentle physical touching, such as stroking.

Dogs also produce oxytocin, and one of our common ways of interacting with dogs is to gently pet them, an action that probably releases this hormone associated with bonding. If dogs as social animals have an evolutionary need for close emotional ties, and they have the chemical mechanisms associated with loving, it makes sense to assume that they are capable of love, as we are.

Rocky’s fear of the water was absolute, and never did abate. He continued to avoid it for the rest of his life and no one ever saw him so much as place a foot in the lake again. No one, at least not Rita or her family, ever doubted his love for her. He lived long enough to see an event occur which would not have happened had he not cared for her as much as he did.

When Rita graduated from high school, she posed for a photo in her cap and gown. Beside her sat a now much older Boxer. The smiling girl had an arm around the dog, and her hand was cinched in his collar, as it was the day that Rocky unambiguously showed her just how much he loved her. ■

Story by Stanley Coren, originally published under the title “Can Dogs Love? A True Story” in Modern Dog, the lifestyle magazine for modern dogs and their companions

Dr. Stanley Coren is professor of psychology at the University of British Columbia and author of many books on dog behaviour, including The Intelligence of Dogs and How Dogs Think. His website is stanleycoren.com.

Fear is not a bad thing. It’s there to let you know you need to pay attention. Sometimes it’s an indicator that you need to beware and back off. But sometimes, you need to have the kind of business acumen that lets you jump in … in the face of your fear. The key to knowing the difference, of course, is discernment.

Recognizing the importance of a well-rounded business acumen, I recommend Kevin Cope’s through treatment of the subject, Seeing the Big Picture: Business Acumen to Build Your Credibility, Career, and Company. Here’s a quote from Bob Collins’s five=star review of the book on Goodreads.com:

“A fairly quick read, but packed with essential information for building your business acumen. Cope focuses on the five main business drivers: cash, profit, assets, growth, and people. He explains the importance of each and how companies balance them. … Easy to read and understand with many examples taken from business and events we all know and can relate to.”