Pet lovers understand that having a pet changes everything. But when Elizabeth got Leontine at the pet rescue adoption center, she had no idea that sweet little kitty was going to make such an impact on her business!

Leontine was an adorable kitten. But it didn’t take her long to let Elizabeth know that, tiny as she was, she was in command.

You know what I mean?

When Elizabeth cooked, Leontine wanted to prowl the countertops. If Elizabeth went out, the kitten gave her such a hard time when she returned that she began loading her into a portable kennel and taking her along, just about everywhere.

And when Elizabeth worked on the computer, there was Leontine, doing her best to cover the keyboard with her growing tiger-striped body.

Ach! What was she to do with her? Annoying though her bad habits were, taking her back to the pet rescue adoption center was out of the question.

Elizabeth did finally manage to teach her to stay off the kitchen countertops. How? Jumping onto them led to big squirts of water from the dreaded spritzer.

Continually blocking Leontine’s approaches to the keyboard with a stern “No!” did nothing to deter her. Elizabeth finally began closing the door to her office whenever she was going to work on the computer. This made her feel bad, though. Leontine would sit at the door and mew, sometimes for half an hour before giving up and going to find some other entertainment.

Then the light went on, figuratively speaking. This view of Internet business expert Ken Krell hosting a social media webinar started Elizabeth thinking there might be a place for her cat in her computer room after all! Sometimes. When the situation warranted. 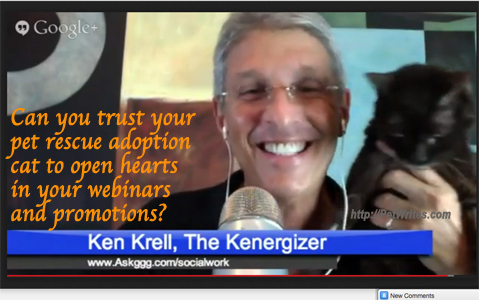 That’s Ken’s own black cat, Mollie. He mentions her often in his webinars, and from time to time you see her tail waving over his keyboard. Is she an interference? Not at all. If anything, she lends a homey and heartwarming feeling to Ken’s teaching.

So what did seeing this do for Elizabeth? She was overjoyed at the thought that Leontine’s attraction to the keyboard might actually become an asset!

So, there you go – lemons into lemonade. Cat marching or lying on keyboard becomes a show stopper you can use to generate new business!